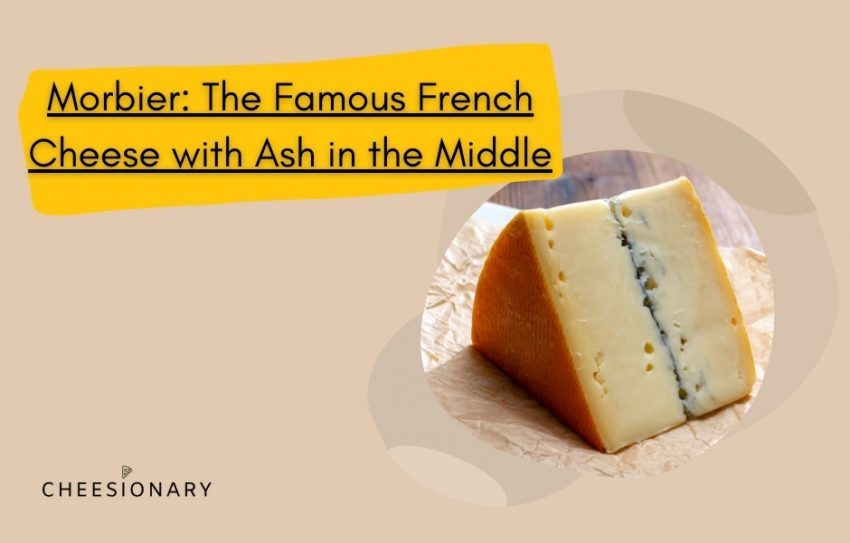 Morbier is a pressed cooked cheese from the Franche-Comté region made from raw cow’s milk. You might recognize it as the French cheese with blue to black-colored ash in the middle – that is sometimes mistaken as mold – and its orangey-beige rind.

It’s first created in the 19th century in Morbier, Jura. During that time, the farmers didn’t have enough milk to use to make milk-hungry comté cheese in the winter. So, they found a way to use what they have in just two steps.

Despite its odd look, morbier actually has a creamy, lightly sour, and nutty flavor. It’s semi-soft and its rind melts in your mouth. Here are some other morbier-related questions and answers you should know.

What is the Ash in Morbier?

The ash you see in the middle of morbier nowadays is actually vegetable charcoal. However, the traditional process of making morbier involved real ash to protect the fermented cheese from damage and insects.

How is Morbier Made?

To make morbier the traditional way, farmers before would use the raw milk they milked during winter and heat it at 37°C/98.6°F. Then, they let the curdled milk ferment overnight and cover it with wood ash from the cauldron or soot to avoid bacteria from forming and avoid insects like flies from damaging the cheese.

At the same night or on the next day, the ash-covered cheese is topped by an equal layer of fresh curds – the reason why there’s the ash in the middle. The cheese is then aged for 45 days to 3 months.

Nowadays, morbier supply isn’t as limited as before – you pretty much can grab a good slice in any season. The ash in the middle is replaced by vegetable charcoal, which gives the cheese a fruity hint.

What’s the Smell of Morbier Cheese?

Morbier has a slightly sulfuric, grassy, and pungent aroma.

What’s the Taste of Morbier Cheese?

Can You Eat the Ash on Morbier Cheese?

Yes, definitely! Don’t worry because nowadays, the black or blue lining you see in the middle of morbier is not ash, but just vegetable charcoal.

How Do You Eat Morbier Cheese?

Appreciate the delicate taste of morbier by adding it to your cheese platter. Pair it up with some slices of pain aux céréales (a less-denser version of sourdough bread with mixed grains like oats, rye, and barley) or pain au cacao (sourdough bread mixed with cacao powder). Make sure that you leave the cheese in room temperature at least for an hour before serving.

You can also use morbier in sandwiches, tarts, and baked pasta. Or if you want to go real French, you can try to make a Jurassienne tartiflette, called the morbiflette, where you bake thinly sliced potatoes with onion, bacon, and slices of morbier on top.

Here’s what you can drink with morbier:

If you’re looking for a morbier cheese substitute, you can try using the following:

Wondering what fun dishes you can make with morbier? Here are a few recipes you can try:

Potatoes, bacon, and cheese – what else can go wrong in this simple yet tasty dish?

Croque monsieur is a French ham and cheese sandwich you can’t miss in French cafés and boulangeries. Here’s an easy recipe where you can use morbier slices. Remember to serve this warm!

Add some creaminess and cheesiness to your normal pumpkin soup with this recipe.

Other French Cheeses with Ash in the Middle

Morbier isn’t the only cheese with ash in the middle. You’ll see other cheeses with ash (or vegetable charcoal) inside and out.

Some cheeses with ash include:

There’s definitely more to add in this list. A clue to know if there’s ash in or outside the cheese is to check for the word “cendré” or just check out the color.